If you were to go back and talk to every one of my former employers (and current) I think you'd find a common theme: I was reliable, loyal, and did what I was supposed to. This is the mentality and focus I bring to the table as a potential future mayor.
I spent years 1-11 of my life growing up about 20 miles southwest of Boston. My Massachusetts roots had me end up a fan of the New England Patriots. For the first 20 years of my life it wasn't great but the last 20 were a tad bit better. During that Patriots historic dynasty a theme appeared, DO YOUR JOB. It was a simple idea, as a football player you have a position, a duty, a roll to play. In that roll you needed to do what you were asked to do.
That's my plan. As Mayor of Provo you will find me in Provo, advocating for Provo, shopping in Provo, trying to build a better Provo. I won't go missing. The citizens and employees of Provo will see me doing my job. 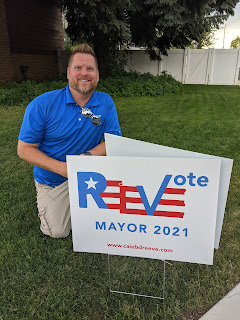 But building Provo isn't only my job to do alone. I'll do what I can but Provo won't become a better place for everyone without an investment from everyone.
One of those duties, one of our jobs, we have as citizens, is to vote. Don't go blindly. Local elections will affect you more than any other type of election. I've said this before and I will again, I may not be the right candidate for you. That's fine. But come to that conclusion because you put in the effort to know one way or the other. If you've ever asked a question like: Who is our Mayor? Or what has our current mayor done? There's an election? Please, I beg you, do some research and find out who is the right person for you.
Here is a link to the candidates running:
https://www.provo.org/departments/city-recorder/election-information/2021-candidate-information
Here is a link to register to vote if you are not currently registered or want to make sure your information is correct.
https://vote.utah.gov/
Ballots are being put in the mail. You'll get them this week. Be ready. Be a part of the process. Be informed. VOTE.
Posted by Caleb Reeve at 10:09 PM